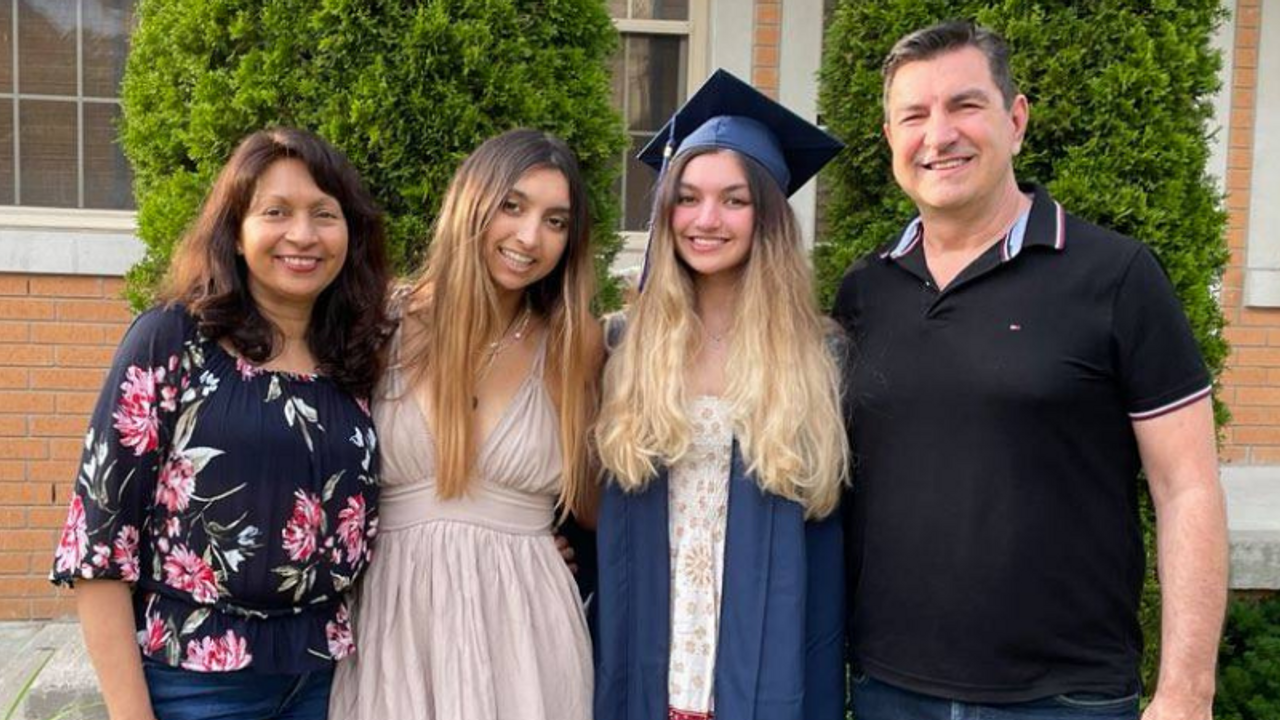 Photo: Carol Ward with her partner David and her daughters Nicole and Kayla (graduating)

Everyone has moments when they want to stop moving forward. On a run, at work, hitting a learning curve with a new skill, after a discouraging turn of events. Sometimes we take these challenges in stride. Other times we feel our resolve drain away like melted ice cream down a waffle cone. We might react differently to the same circumstance at different times, sometimes with persistence and other times with the opposite.

And, you know, I haven’t found a good word for the opposite of persistence. There’s an energy in persistence that isn’t accounted for in words like ‘lethargy,’ ‘indifference,’ or ‘apathy.’ No word I can think of accurately describes what that lack of energy feels like. That’s problematic because, when we face difficulties, that energetic absence is the greatest barrier to getting moving when feeling stuck. It’s difficult to re-energize and see possibilities if we are in a downward spiral of blame, apathy or excuses.

Gratefully, we learned about persistence in our recent interview with Carol Ward, an inspiring woman, mother, accountant, and Master Neuro Linguistic Programming (NLP) practitioner. Carol has an incredible ability to cultivate persistence through difficult times through positive mindset, a community of supportive friends and family, and a willingness to make quality, intentional changes in her life. She’s used her skills to not only build a fulfilling professional and personal life, but also to persevere through breast cancer (twice!), the loss of her mother, and the global pandemic.

I’ve always listened to my inner voice, as far back as I can remember. It ‘s an inner voice that allows me to be persistent. It says ‘I don’t give up easily. I will keep going.'

The Power Of Your Inner Voice

For Carol, that inner voice is inspired by her mother. A woman with gentle, influential strength, Carol considers her mother a role model and a constant positive force in her life. That persistence she modeled? It showed up in the difficult moments, such as when Carol and her siblings were sent far from their hometown in Guyana to England and Canada before her parents were ready to join them. Carol’s parents visited once or twice per year, which was emotionally difficult for the close-knit family. But they did their best to stay positive, appreciate the time they had together, and stay focused on their goals.

Years later, Carol’s mother was diagnosed with leukemia and that gentle persistent strength was modelled again. Carol remembers her mother focused on connecting with her family though she was in a lot of pain, even as the end of her life drew close. “She was able to connect with us at the very end … I don’t know where she found the strength, this strong, strong woman.”

Carol says she draws on these memories to find persistence during her own challenging chapters of life, such as both times she battled breast cancer.

Her inner voice is so tightly ingrained with who she is, it often speaks up without her having to go looking for it. It’s a capacity that can be cultivated with attention, regardless of what habits you might have now. That’s not to say you have to navigate challenges on your own. Other voices can rally alongside you, which brings us to the second pillar of Carol’s persistence: Community.

Rallied By A Supportive Community

Persistence takes energy, and while there are ways to cultivate that in ourselves, it helps to have other positive forces around you who do the same. For Carol, quality friendships, such as those from her Bible study group and professional groups like FemCity, have helped time and time again. Particularly when breast cancer hit for the second time and she was faced with a battle she thought she’d already won. Her friends called often and brought meals, showing Carol that she wouldn’t have to handle whatever lay ahead on her own.

They were bringing in meals and would call me to say, ‘Hey Carol, How are you doing?’ It’s the friendship and the sense of community that really keeps you going.

Carol’s positive nature influenced positive relationships with her health care team. "I've always had this expectation that people will work with you, because people are friendly and people will try to help you.” They were willing to be accommodating, scheduling appointments to meet Carol’s needs and support her recovery.

Carol’s family is another strong source of support. Working as a team, they adjusted childcare to support her going back to school to become an NLP practitioner. Having learned how important mindset was throughout her experiences with breast cancer, Carol realized she wanted to expand her work into coaching about money and mindset in addition to her CPA work. When told her husband, "this is what I want to do,” they looked at the logistics, and worked it out. Choosing her attitude got her through difficult times and she wanted to help others learn what she had learned to overcome trying times. "

I reflect on what I have inside and I always try to help people back.

Family is everything to Carol and she stays in close contact with siblings, supporting each other as much as they can. Her sister is her best friend. For Carol, these networks of supportive voices and extra hands provide a rallying boost in day to day activities as well as during times of transition or hardship.

Finding Resilience Through A Willingness To Change

Carol also raised an interesting point about persistence being more about perspective than circumstance. I agree! It’s why sometimes we might react to the same situation with positivity and other times with dejection. Our perspective might be different based on how we’re feeling and what kind of internal stories we’re writing. For Carol, being willing to look at why she felt a certain way during circumstances helped her find a choice she felt better about making.

Carol saw the pandemic as an opportunity to be curious and ask what was possible. Rather than focus on what couldn’t be done, she decided celebrations didn’t need to be missed but changed. Carol encouraged her daughters to pick out ways they could celebrate milestones, such as graduation. To focus on what’s lost is to lose out on the joy of the moment, she explains. She insisted that they go out together and buy dresses to enjoy the fun and bonding of that experience. By shifting perspective and being open to celebrating in new ways, we allow the joy of achievements and milestones to stay with us, in all their recharging power.

Carol is a warm and caring person. She also has deep strength. This combination shows up as graceful, joyful energy and wise leadership reminiscent of what she witnessed in, and described about her mom. She models for us what’s possible when we live by our values and persist on what matters. Carol reminds us to pay attention to our inner voices, the community we surround ourselves with, and our willingness to change when circumstances change. The result: healthy mind and body, a wealth of relationships and a generous spirit.

Staying grounded and positive during challenging times is central to overall well-being, as Carol's story demonstrates. Because it's so important, I created a course (which I'm offering to you for free) to support your journey to finding possibility and positivity: Simple Practices to Shift Your Mood and Improve Your Energy.

Gratitude to Lyndsay Barrett for her significant contribution to the writing and editing of this article.