Let Your Body Lead Your Mind To An Upward Spiral Of Well Being. A Story About Getting Moving 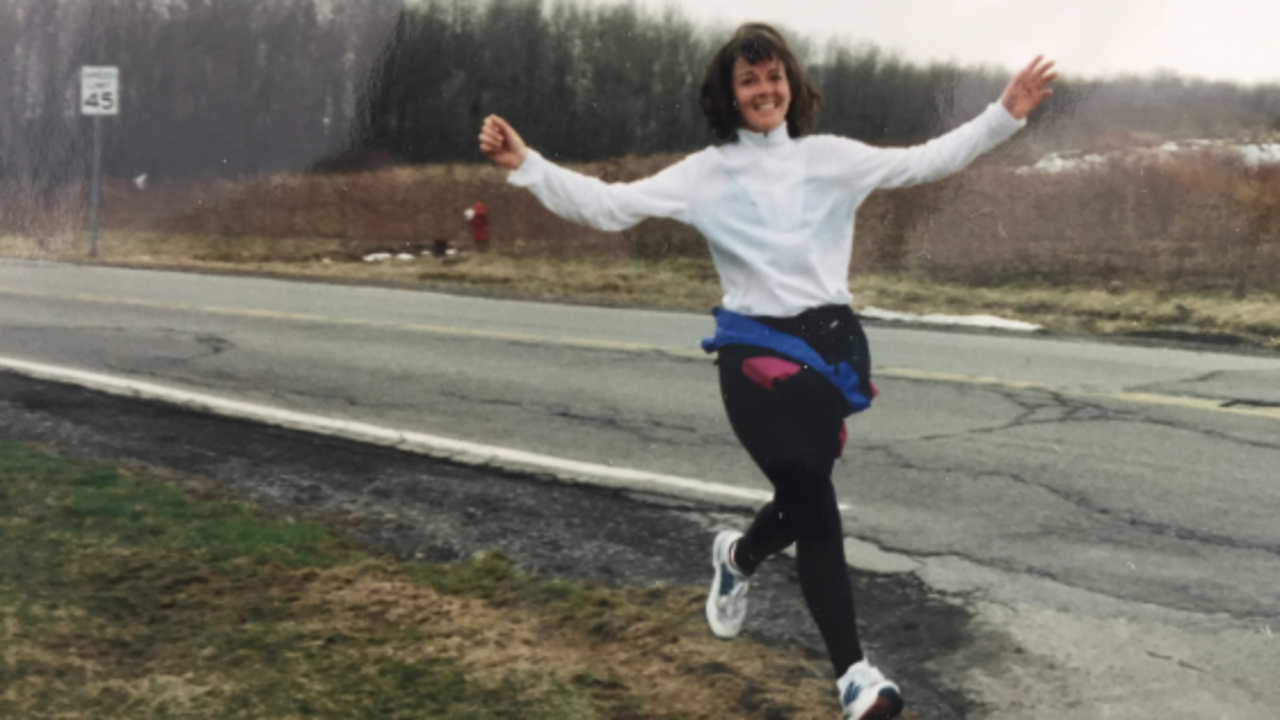 When I was in my 20’s, on my desk you’d see a can of diet coke, a jar of candies and an ashtray. Yes, it was not that long ago that we could smoke in the office. Hard to believe from this vantage point. I wasn’t concerned about my lifestyle and health choices at the time. I thought the diet coke was a good thing – better than a full sugar coke right?! And what harm could come from a few candies? I wasn’t a chocolate bar person. Just candies. I loved all the sweet sugary tastes, textures and colours.

From Cigarettes and Sugar to Running Shoes and the Road

From time to time I thought about quitting smoking and every once in a while I’d try to stop but the problem was that I loved smoking. Those big deep inhales and long slow exhales. What could be better?! When they banished smokers to smoking rooms, that made smoking more fun. People would be telling jokes and the room was filled with laughter. In fact, a few people who didn’t even smoke used to come to the smoking room because it was so much fun in there.

Fast forward thirty years and I don’t recognize the person I used to be. My tolerance for cigarette smoke is nil. Candies and soda rarely if ever pass my lips. My new favorite food color is 'greens'. How did this happen? It was not a linear path however the turning point happened when I got moving. Literally. I started running. And then I learned about sugar.

I always wanted to be active in some way.

I wasn’t coordinated enough for aerobics classes that were popular at the time. I liked swimming but it seemed like a lot of work and inconvenient. A friend had suggested running but it seemed too advanced for me. How could a somewhat chubby, smoking party girl consider running? In the back of my mind however I remembered a day running around the track for Phys. Ed. class when I was about 14 or 15. Something clicked that particular day and I just wanted to keep running and running and running. In my early 30’s I began to feel a pull to have that experience again. What the heck! One day I put on a pair of sneakers and went for a run. Twenty-four minutes and I felt pretty good. And so began my curiosity and infatuation with running.

I had a problem though. Smoking and running didn’t go together very well. The way I maneuvered around it was to get up early and go for a run at 5:30 am before my first cigarette! Trying to outsmart my bad habits, I figured I could minimize the impacts of smoking and keep running. Of course I was kidding myself and eventually over time, with a few stops and starts, I did quit smoking for good. A friend of mine said to me “you’ve just substituted one addiction (running) for another (smoking)” I looked at her and replied “And what’s the problem with that?” At least running was good for me. Sure in my early years as a “runner” rather than a “smoker” I was probably a little obnoxious and a lot boring to my non-running friends because my life evolved around running. I felt so good in a way I never experienced before. Not just my physical health but my mind and spirit too. Over time my over-the-top enthusiasm leveled off and running became a part of my life as a soul rather than sole obsession.

A few years into my new found running life, I became interested in health and nutrition too. How could I be healthier and run faster? Longer? Stronger? I started reading and educating myself. The same friend who had initially suggested running had also given me a copy of an old book called “Sugar Blues” published in 1975. When I first picked it up, I never got past the first chapter. The author, William Dufty, stated that sugar was poison, more lethal than opium and an addiction no different than heroine or cocaine. I put the book down, saying to myself that my candy habit wasn’t that big of a concern. It was about 6 years later, after running for awhile that I found the courage to pick up that book and actually read it. Yes, it felt like courage because intuitively I knew that my life was going to change. And it did. Once again for the better. To maximize my energy for prolonged periods of time, I needed to quit my sugar habit. And so I did.

Let Your Body Lead Your Mind

The motto of the coaches from my first Marathon training course was ‘the mind leads the body’. A true statement. So much about running and endurance sports and any big endeavour in life is about mental discipline, the stories we tell ourselves and the questions we ask. When we want to make a lifestyle change, the opposite is true too. The body can lead the mind.

Getting moving creates a positive flow of energy that rewires our brains and helps us write new stories about ourselves. The body and the mind harmonize into an upward spiral of well being.

The moral of this story – get moving. Anything you enjoy. Experiment to find out which activities make you feel good. And keep doing them. Keep moving. Don’t give up. Let your body lead your mind to a new version of you. Then you can write your new story and share it too! Maybe you already have! Let us know how moving your body has change you.